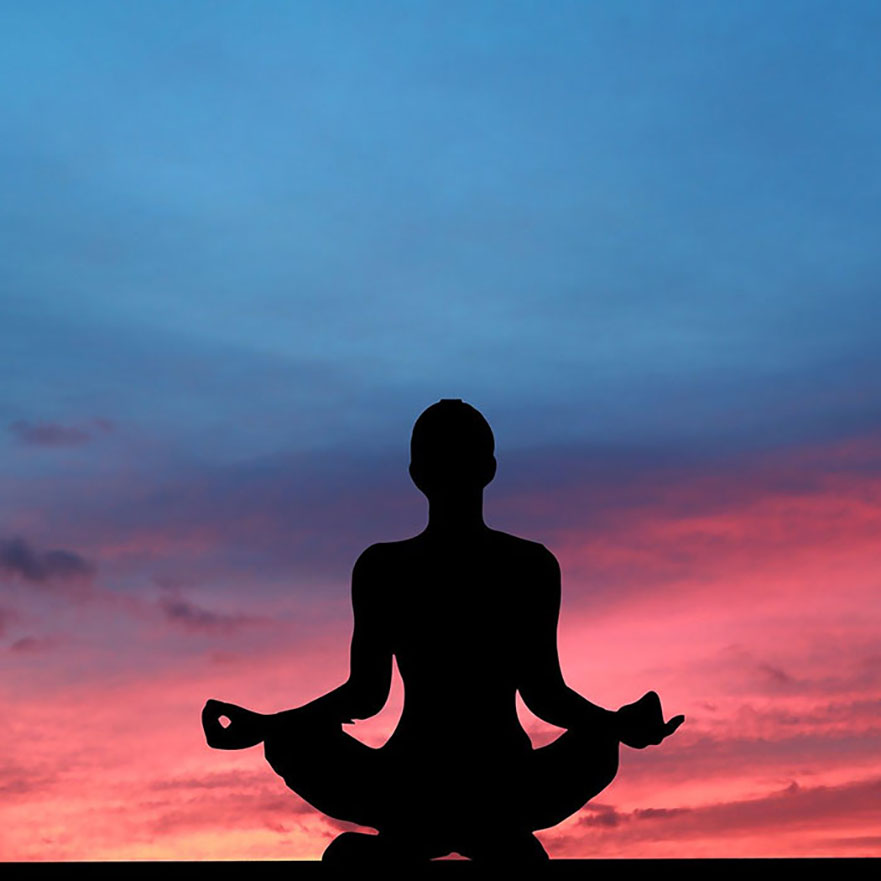 This article is an academic paper I wrote as part of my yoga teacher training. It explores the concept of prana and pranayama practice.

Reading this you might think that it is all rather confusing (all those academic references!) but in my classes breath control is gently introduced and students often reflect on how calming and grounding they find it.

Pranayama is one of the eight limbs of yoga described in the Yoga Sutras (Patanjali, 2.52). It says that when we practice pranayama the veil is gradually drawn away from the mind which becomes fit for concentration.

Lysebeth (1979, p4) explains that “Prana with a capital P designates the cosmic energy in its entirety while prana with a small p indicates its manifestations”. Thus the “science of controlling prana is called pranayama (ayama = to curb or to master)”. Lysebeth (1979, p6) considers the interpretation of pranayama simply as breathing exercises “to misunderstand their true purpose, which is the collection, storing and conscious control of the vital pranic energies in our bodies.”

Desikachar (1995, p56) says that “pranayama is first and foremost to give many different possibilities for following the breath” in order to prepare us for the stillness of meditation. As teachers we recommend students “return to the breath” when the mind becomes busy or an asana demanding.

(Desikachar, 1995, p54) defines ayama as “stretch” or “extend” and prana “that which is infinitely everywhere”, a vitality that flows continuously from inside. He says that one definition of the word yogi is “one whose prana is all within his body” and not leaking out which happens when we are disturbed and unbalanced. Iyengar (1966, p22) simply describes prana as “breath”.

By regulating the breath yogis learn to control the mind (Iyengar, 1966, p3). He describes chitta (the mind, reason and ego) as like a chariot yoked to a team of horses, one of which is the breath (p24), and the mind will go in the direction of the most powerful horse. He who has control of the breath has control of the mind. Patanjali sees the mind and breath as intimately connected and the activity or cessation of one affecting the other (Iyengar, 1966, p8).

According to Iyengar (1966, p16) pranayama “cleanses and aerates the lungs, oxygenates the blood and purifies the nerves”. He says of more importance is its ability to cleanse the mind of disturbing emotions.

Iyengar (1966, p 24) says “As the very object of Yoga is to control and still the mind, the yogi first learns pranayama to master the breath. This will enable him to control the senses and so reach the stage of pratyahara. Only then will the mind be ready for concentration (dhyana).”

“The yogi, having perfected himself in the asanas, should practice pranayama according to the instructions laid down by his guru, with his senses under control, observing all along a nutritious and moderate diet. When the breath wanders, the mind is also unsteady, but when the breath is still, so is the mind, and the yogi lives long. So one should restrain the breath.”

“Pranayama is the regulation of the incoming and outgoing breath with retention. It is to be practised only after perfection in asana is attained. Pranayama has three movements: prolonged and fine inhalation, exhalation and retention; all regulated according to duration and place. The fourth type of pranayama transcends the external and internal pranayamas, and appears effortless and non-deliberate.”

Desikachar (1995, p59) suggests that “The object of pranayama practice is to emphasise the inhalation, the exhalation or retention of the breath” with exhalation the most important part in order to eliminate impurities and reduce avidya. In this he disagrees with Saraswati (1996, p364) who prioritises retention. The Yoga Sutras discuss the breath in the order of inhalation, exhalation then retention (Patanjali, 2.50) but all three form the core aspects of pranayama Iyengar (1966, p22).

In western classes we use pranayama to define the part of the class where we focus on breathing exercises rather than asanas. Typically taught after physical practice the pranayama section includes one or more specific breathing exercises with English or Sanskrit names such as Pranayama Square or Shining Skull: Kapalabhati. These exercises are appreciated for their ability to further calm the mind after asana and to lead us into the deep relaxation of savasana acting as a bridge between external physical and internal practices and reflecting the sequence Patanjali outlines in the Yoga Sutras.

The Sivananda method teaches kapalabhati and pranayama before asanas. James Hewitt, in The Complete Yoga Book (1977), suggests that asanas and pranayama should not be practised in the same session, so that the true benefits of each can be experienced.

Practise and progression with pranayama

Iyengar (1966, p361) says that “Pranayama training demands mastery of asanas and the strength and discipline arising therefrom”. He compares the yogi’s lungs to pneumatic tools that need to be used properly under the guidance of an experienced teacher.

Any new skill is generally learnt in stages. A novice piano player does not play a complex sonata in lesson one. It therefore makes sense that simple practices are explored such as awareness of the natural breath with its slight pause between regulated inhales and exhales. This may be followed by a practice such as Mahat Yoga Pranayama which teaches awareness of the physicality of the lungs and breathing apparatus highlighting the three sections of the lungs (lower – abdominal, middle – intercostals and upper – clavicular) (Spence, p4).

Physiologically the lungs will be conditioned and developed with practice so lung capacity will increase with these basic breathing practices.

From this first pillar of breathing we move to Sukha Purvakha Pranayama where we leave the physicality of the bodily components that driving the breath and instead “deal with the act of breathing” (Spence, p4). This practice brings awareness to the duration of the elements of the breathing cycle and over time may develop from a simple inhales and exhales to incorporate holds. Further progression is made by increasing the duration and number of rounds.

Desikachar, (1995, p59) says that “Pranayama should only be practiced by people who can really regulate the breath”. This indicates the skill involved and something that may be mastered over time. He says “When we take up the practice of pranayama, we should proceed gradually, step by step” (Desikachar, 1995, p62).

Saraswati (1996, p364) says that in pranayama practice “more emphasis is given to inhalation and exhalation at the beginning”.

Iyengar (1966, p364) advises that “Thorough mastery of inhalation (puraka) and exhalation (rechaka) is essential before any attempt is made to learn antara kumbhaka (retention following inhalation).

Desikachar (1995, p61) discusses the importance of progression saying “Normally we work with ujjayi for a long while before we introduce nadi sodhana to our practice”.
We therefore align ourselves with the great teachers of yoga practice when we introduce progression to our pranayama practices, becoming familiar with Mahat Yoga Pranayama and Sukha Purvakha Pranayama before progressing to more advanced techniques.

The role of the nostrils

Lysebeth (1979, p40) states that “the yogis regard the nose as the main prana-absorbing organ” with the lungs “the seat of important pranic activities”. He laments that the role of smell is shrinking as “man becomes more intellectual and more civilised, sight and hearing increase in importance to the detriment of the other senses” (p46). He describes how it is possible to direct a considerable stream of air towards the olfactory zone “on order to grasp the greatest possible quantity of prana and increase the efficiency of pranayama exercises”.
The air that enters the nose is divided into three streams in each nostril. In the olfactory region at the top of the nasal cavity the direction of the air flow is reversed – it is here that smell is discerned. And this direction to the ultrasensitive region happens in all pranayama.

Breath in yoga is normally through the nose (Saraswati 1996, p369). The reasons/benefits are as follows:

Saraswati (1996, p369) says that “While inhaling, the nostrils should dilate or expand outwards and while exhaling, they should relax back to their normal position”.
The Hindu notion of Prana refers to the energies carried by the air. By breathing intentionally it is believed that we are able to draw more energy from the air. Prolonged inhalation stimulates the Sympathetic Nervous System (which creates the fight or flight response raising heart-rate and blood pressure) and deep prolonged exhalation activates the opposite branch of the Autonomic Nervous System (the Parasympathetic) which reduces heart-rate and blood pressure.

The right (feminine) nostril is energetically associated with the body’s heating energy, symbolised by the sun and the left (masculine) nostril with the body’s cooling energy, symbolised by the moon (YogaJournal, 2017). Nadi sodhana therefore brings balance to this energy as well as the flow of air through the nasal passages. It is thought to “balance the subtle energy, or prana, of the energetic body” (Schofiled, 2018).

Nadi (tube or channel) is the concept used to describe the network that allows energy to travel through the body. The three principal nadis go through the spinal chord and the chakras (the energy centres of the body). Pranayama (alongside asanas and chanting) is a way to move prana around the body via the nadis.

Traditionally the practice of jala neti is encouraged to clean the nostrils with salt water (Saraswati 1996, p369).

Before a practise such as Nadi Sodhana (Alternate Nostril Breathing) it can be sensible to blow the nose in order to clear the nostrils of mucous.

Using just one nostril forces more breath through the space – particularly beneficial if one is smaller or blocked. Nadi Sodhana is also prescribed as a technique for lengthening both the inhale and exhale (Desikachar, 1995, p61) as only one air space is available for breath.

An energetic inhale through the nostrils may also be highly energising, whereas a slow, measured inhale may result in sharpened concentration and focus.

Be the first to hear

Sign up to receive more information from Marie about yoga classes

We use cookies to ensure that we give you the best experience on our website. If you continue to use this site we will assume that you are happy with it.Ok