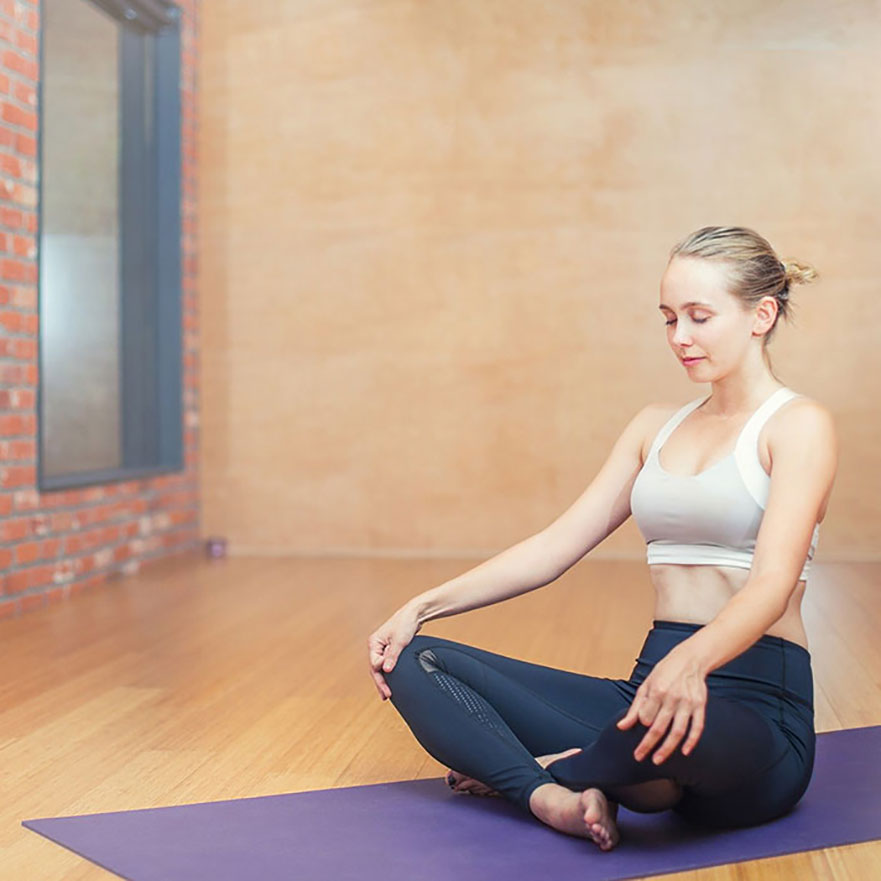 As part of my yoga teacher training I wrote a number of essays on aspects of yoga practice. This essay is to do with the physical aspects of the Bandhas.

I use the concept of the bandhas all the time in my classes but will not often refer to them by their Sanskrit names preferring instead to talk about drawing up the pelvic floor muscles, engaging the core or retracting the chin. This is all part of my philosophy to bring yoga to the more mainstream rather than it being seen as a scary practice with a whole language of it’s own to accompany lots of pretzel shaped postures.

So don’t be put off by the Sanskrit in this article. The concept of the bandhas is not so different to the way in which Pilates teachers will encourage you to work your core muscles.

What are the Bandhas?

Desikachar (1995, p71) says that the word bandha means “to bind or tie together, to close”. He says that in the way it is used in yoga it also means to lock. So when we execute a bandha we lock certain areas of the torso in a particular way. The bandhas are seen as locks or energetic seals that once engaged can control or retain dissipating pranic energy.

The three major bandhas are:

Maha Bandha is to practice all three bandhas at the same time.

There are also two minor bandhas

Anatomy and physiology in relation to the bandhas

Yoga anatomy specialist David Keil is cautious in ascribing muscles to the bandhas as he recognises that they have energetic as well as physical components. However, clearly a number of muscles are used in the practice. 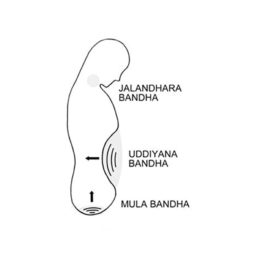 Mula Bandha is a diamond shape hammock of muscles that spans the space between the bones of the pubis, the two sitting bones) and the coccyx. These muscles form part of the pelvic floor.
They are activated using a subtle lift action which many people would describe as pelvic floor or Kegal exercises. In simple terms you contract the muscles you would use to stop yourself breaking wind and urinating (Spence, D).

In Uddiyana Bandha the abdominal wall is retracted on empty lungs creating a deep hollow. It is possible through the active engagement of abdominal muscles – specifically the psoas (psoas minor and major and iliacus). Yoga teachers will often encourage students to draw the navel in towards the spine and up towards the rib cage. It would commonly be called ‘engaging the core’.

Jalandhara Bandha
Jala means a net, web, lattice or mesh (Iyengar, 1966, p366). It engages the muscles of the throat.

Jalandhara Bandha is often only used in Pranayama practice and a few asanas such as bridge and shoulder stand.

I will often suggest that students engage the chin lock in a class – what this means is engaging jalandhara bandha.

Which other muscles are involved in general “core strength” practice?

In relation to the concept of more general core strength (not necessarily a yogic concept), the following muscles are engaged:
“The major muscles involved in core stability include the pelvic floor muscles, transversus abdominis, multifidus, internal and external obliques, rectus abdominis, erector spinae (sacrospinalis) especially the longissimus thoracis, and the diaphragm. The minor muscles involved include the latissimus dorsi, gluteus maximus, and trapezius.” (Wikipedia)

Breathing and the bandhas

Jalandhara Bandha
Jalandhara bandha is generally used while the breath is retained but may be used during even breathing in some asanas such as shoulder stand.

Uddiyana Bandha
As you begin to exhale you contract the abdomen so that by the end of the exhale it is fully contracted and drawn up and back towards the spine. This will cause the diaphragm to rise. As the bandha is mastered the abdominal area will become hollow. You can see this demonstrated in the image below.

When the navel is pulled in and held the breath goes to the chest. The diaphragm no longer has the ability to push down and the abdomen cannot go out which results in the breath and force being directed upward into the chest (Keil, 2010).

It should be possible to maintain the uddiyana bandha whilst breathing evenly.

Mula Bandha
Mula bandha develops out of uddiyana bandha. The upper abdomen and diaphragm are released but the contraction in the lower abdomen is maintained (so the area below the navel is contracted and the area above is released). The breath is held after the exhalation for both bandhas and mula bandha may be maintained whilst breathing.

The benefits/claims about the bandhas

Pam Horton claims that in jalandhara bandha the lock brings pressure to the carotid sinus nerve which alerts the brain to send a message to the heart to slow down.

James Hewitt (1983 p49), writing in The Complete Yoga Book describes Uddiyana Bandha as “a blessing to mankind; it brings health, strength and long life to those who practise it”.

The website Yoga in Daily Life claims that as the bandhas momentarily stop the flow of blood, there is an increased flow of fresh blood with the release of the Bandha, which flushes away old, dead cells. In this way all the organs are strengthened, renewed and rejuvenated and circulation is improved.

Bandhas are thought to also be beneficial for the brain centres, the Nadis and the Chakras. The energy channels are purified, blockages released and the exchange of energy improved. Bandhas alleviate stress and mental restlessness and bring about inner harmony and balance.

Rolf Sovik, president of the Humalyan Institute, and a clinical psychologist claims the following benefits for use of the bandhas:

Mula Bandha strengthens the pelvic floor and helps to prevent prolapse. It’s yogic purpose is to prevent the downward flow and escape or energy through the bottom of the torso (Keil, 2010)

In jalandhara bandha the flow of blood is regulated along with prana to the heart, the glands of the neck and the head and brain (Iyengar, 1966, p366).

In uddiyana bandha the diaphragm and abdominal organs are exercised, the diaphragm gently massages the muscles of the heart which Iyengar claims tones it.

Pam Horton claims that it is beneficial for the prostate and counteracts prolapse.

Precautions and prohibitions when working with the bandhas

When the breath is held in there is an increased potential for herniation or prolapse. Those with hernias or pelvic floor prolapses should not practise the bandhas.
Other contraindications include high or low blood pressure, stomach ulcers, recent abdominal illness or trauma, glaucoma and heart disease.

Jalandhara bandha – don’t hold for more than 10 beats without mula bandha.
Don’t build up if high blood pressure is present
No pain should be felt in the neck. And if short necked roll a scarf under the chin to supply the pressure.
There are many precuations for uddiyana bandha including hiatus hernia

Applying the bandhas when practicing Asana

The bandhas can be practised during asana, for instance in downward dog pose. But as Desikachar (1995, p73) advises “Like all other yoga techniques, bandhas should be practiced artfully and not obsessively.”

It is not something I would teach in detail to a beginners class although I would be encouraging contraction of the muscles relating to uddiyana and mula bandhas during many postures – not least to protect the back.

Sukhasana (easy pose – cross legged seated) is a good posture to explore the bandhas. As the breath is drawn in from the pelvic floor upwards mula bandha may be exercised and then uddiyana bandha as the exhale is made and the belly pulled back and up towards the spine. To engage Jalandhara Bandha check the position of the spine and retract the chin a little to stretch the neck before lowering the chin to the chest.

The wonderful cat/cow flow is a good way to explore all three bandhas. Start in table top with a neutral spine and no bandhas engaged. As you move into the cat pose (tail bone down, chin down) you may lift the pelvic floor muscles up (mula bandha), pull the tummy muscles into the spine (uddiyana bandha) and engage the chin lock (jalandhara bandha). You are now in maha bandha where all three major bandhas are engaged.

Be the first to hear

Sign up to receive more information from Marie about yoga classes

We use cookies to ensure that we give you the best experience on our website. If you continue to use this site we will assume that you are happy with it.Ok